Christian singer Erica Campbell of Mary Mary astonished her followers on social media by sharing a post purporting that the NIV version of the Bible has removed 45 verses totaling 65000 words from the bible. The NIV bible is a translated version of the Bible from the original King James version and Erica Campbell has revealed that this Bible is misleading Christians. Singer Erica Campbell who shared about the NIV Bible

In a post shared on her facebook page Erica Campbell revealed that the NIV Bible has left out words like Calvary, Jehovah , Omnipotent just to name but a few of the words left from the total of 64475 words. The singer went further to warn her fans not to be blinded by Satan as the NEW owner of NIV Harper Collins has also published the controversial Satanic Bible and the Joy of Gay Sex. 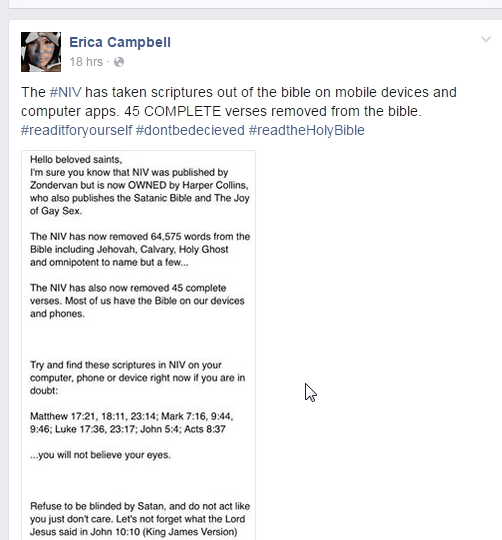 The New International Version is an English translation of the Christian Bible. Biblica is the worldwide publisher and copyright holder of the NIV, and licenses commercial rights to Zondervan in the United States and to Hodder & Stoughton in the UK.

“The NIV BIBLE Has REMOVED 45 VERSES And Is Owned By A Person Who Publishes A Satanic Bible” : ERICA CAMPBLELL

Rules of Betting on Mcheza And How To Win Lyrics: Imela (Thank you) By Nathaniel Bassey And Enitan Adaba

WHO IS FUNNIER ? Top 10 Comedians On CHURCHILL SHOW Who Will Always Make You BURST Into LAUGHTER

GOD Changed Me : Kanze Dena Shares About Her Struggle With Low Self Esteem And Contemplating Suicide 3 Times With Julie Gichuru And Rubadiri : Here Are Top 10 Kenyan News Anchors Who Have Professed Christian Faith In Public

The Day I Said “I Do” : Cute Wedding Photos Of Julie Gichuru ‘The Bride’ With Her Lovely Husband And Parents

Rose Muhando : “A Near Death Disease Led Me To Convert From Muslim To Christianity”

I DO!! : Waihiga Mwaura Weds Joyce Omondi At A Colorful Wedding Ceremony [PICS] NOMA, YANI KALI : Willy Paul’s New Song ‘Vigelegele’ Is Too Far From THE GOSPEL, Your Thoughts ? YOU CAN ALSO READ