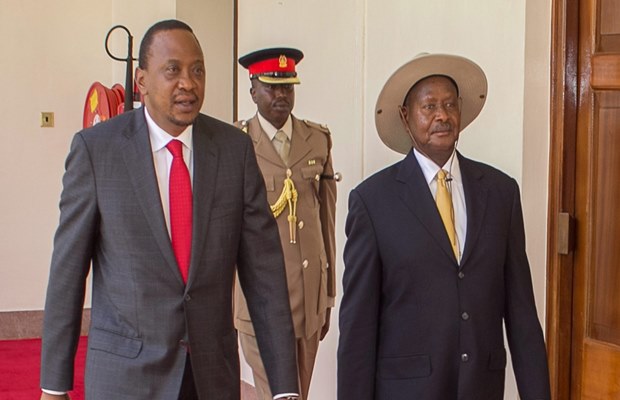 It didn’t go down well on Sunday morning  when Kenyans read the congratulatory message by President Uhuru  for probably supporting  Museveni who is out of favor. President Uhuru Kenyatta on Sunday applauded President Museveni for his re-election in what he described as respectable choice from Kenyans and reiterated the friendship that Kenya holds with Uganda.

With EU having stated the elections were not free and fair and the strongest contender Kizza Besigye being under House Arrest, Kenyans on social media did not approve the message as they felt that it was too early to send such a message at a moment when a number of Ugandans are grieving.

I am very pleased to congratulate His Excellency President Yoweri Museveni on his re-election as President of the Republic of Uganda. The people of Uganda have spoken, and they have spoken very clearly. We respect their choice of President Museveni.

Kenya values its close friendship with Uganda. That friendship is founded on a common history, a common culture, and common interests. In years past, we have worked closely together for the prosperity and freedom of our nations. We look forward to continuing the work that both our nations have already done, together and in concert with the East African Community, the African Union, and IGAD.

We look forward, too, to even closer integration.
I wish President Museveni every success as he serves his nation for another term. He and Uganda can count on my support, and my friendship, as well as that of their brothers and sisters in Kenya. President Uhuru stated through a press release

The comments that followed included.

Wanyama Evan May the whole world understand that this is a personal statement from uhuru and does not in any way represent the view of Kenyans.No sane mind can talk positive about an open dishonest election marred with irregularities and intimidation of opponents like uganda’s.

Kapia Frankline Abdallah I regret on behalf of people of Kenya.The views Kenyatta has expressed here are personal and do not reflect wishes of kenyans.We stand with our Brothers in Uganda this trying moments of their democracy

Peetah Mzito Museveni is a dictator who rules and commands everything in Uganda, he oppressed the opposition so that he could retain power by the bullet. This victory is only his, dictatorship and greed for power is what will ruin Africa.

Kenn Stiffler I wish our president could just inbox him the congratulatory message instead of dragging us all in it.

Harold Harold Sorry Mr president you can not puport to speak for me,as a matter of fact am not party to this statement..