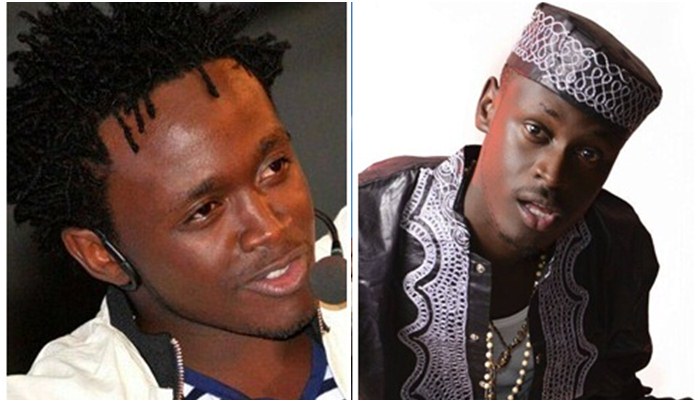 The was an uproar from Christians on social media  immediately Bahati released “Kuchu Kuchu” his new single that featured secular artists Rabbit and Wyre. Some felt that the song lucked the message that would make someone struggling with sin be saved and wondered if it was indeed a gospel song  while others said that Bahati should be left to work with anyone as long as he is preaching the gospel.(Read) Bahati explained that people look the outward of people but GOD looks at the heart and that is the reason why he decided to partner with the two top secular singers . He testified in a message shared on his Facebook page, on a personal experience he had with one of the singers called Rabbit whom he believes will one day crossover to sing gospel song.

“‪#‎TO_RABBIT_KING_KAKA‬
The first time I had this Song ‪#‎KAFIRI‬ I thought for a Moment Rabbit had started singing Gospel Music. It’s one piece that made me think of People differently. In the Bible 1st Samuel 16:7 …though Us men look at the Outward appearance, the Lord looks at the Heart. And for so Long this bro has always been in my Prayers. I happened to Meet King Kaka’s MUM two Weeks ago Just b4 the release of ‪#‎KUCHU_KUCHU‬ and One thing she testifies is Rabbit has grown in Church as a God fearing Child.”Ken ndio alikua anachora Zile Picha za Yesu amebeba Msalaba zakubandika Sunday School” I can well Remember her words. “Naniumuambia aimbe wimbo za Kanisa” But I told her God’s timing is always the Best and in God’s time I know he will Crossover. I have Testimonies from Different people, Fans & even Producer to Our New Release; that Rabbit could ask for time to Pray b4 the Recording Session. I know People view it Differently. Some May Come up to Judge but remember Romans 3:23 …all have fallen short of His glory.No Man is righteous. For King Kaka; all I know is God is smiling He heard your Voice in a Gospel song for Every Dad rejoices getting a Message from a Son.And Romans 8: 16 His Spirit bears with me that You’re a Child of GOD!!! My Prayer is after this Song Your Relationship with GOD will never be Same Again”

Should Rabbit listen to this call from Bahati?