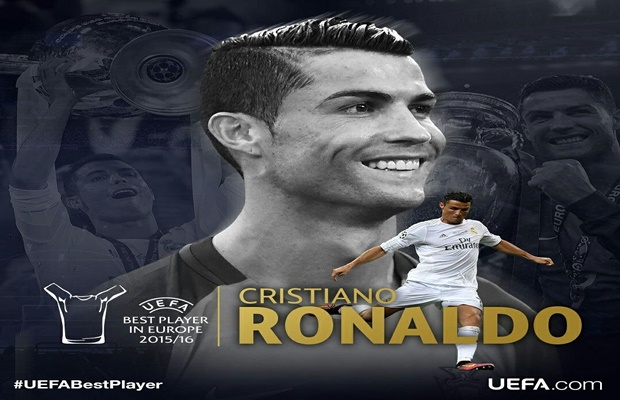 Portuguese forward Christiano Ronaldo has once again added another individual accolade to his trophy loaded cabinet after being crowned the 2015-2016 European footballer of the year.

Despite Missing out on Spanish La liga title to Barcelona and failing to complete the EURO Finals due to an injury, Ronaldo was the favorite to pick the award after inspiring Real Madrid and his Portugal soccer team to The UEFA Champions League and the UEFA Euro 2016 finals respectively. Ronaldo scored 35 league goals, 16 Champions league goals and adding 3 at the Euro 2016 Finals as Portugal stunned host France. Bale was one of Ronaldo’s team-mates in the Spanish capital and skippered Wales to the semi-final stage of Euro 2016.

The shortlisted trio received the most votes from journalists from each of UEFA’s 55 member associations, finishing ahead of Barcelona duo Luis Suarez and Lionel Messi, as well as Juventus goalkeeper Gianluigi Buffon who were among the original list of six.

UEFA created the prize after the original European Footballer of the Year honor, the Ballon d’Or, merged with FIFA’s world player award.