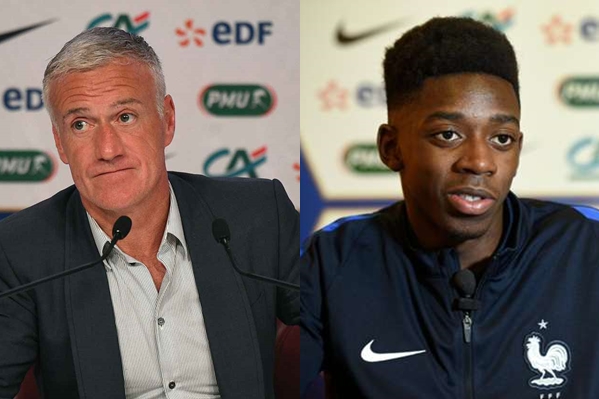 Didier Deschamps is looking forward to seeing the impact Ousmane Dembele can have on his France squad after the Borussia Dortmund youngster was selected for the fixtures against Italy and Belarus.

The 19-year-old has impressed for Dortmund since moving from Rennes in the close-season, having started all three competitive matches so far this term for Thomas Tuchel’s men.

And, following the withdrawals of Lyon duo Nabil Fekir and Alexandre Lacazette, Deschamps has now handed the winger his first senior international call-up.

“It is not because I’m worried that I called Ousmane Dembele. Obviously offensively we have two players unavailable,” Deschamps said. “In addition to that, some other players lacked some time on the pitch during the weekend.

“It’s true that Ousmane is a young player and that he was due to play two important games with the Under-21 [team].

“I, however, need a player who is fit like him because he completed the entire [pre-season] preparation with Dortmund, and was there during their first game in the Bundesliga.

“He’s a fast player able to play on both sides. I wanted to have available different kind of players. I’ll see then during the coming days how fit all the players are.”

With Crystal Palace playmaker Yohan Cabaye joining Lacazette and Fekir in pulling out of Deschamps’ squad, the former Marseille and Juventus boss has also called-up Atletico Madrid forward Kevin Gameiro and Inter midfielder Geoffrey Kondogbia, for what are France’s first matches since they lost to Portugal in the final of Euro 2016 on home soil.