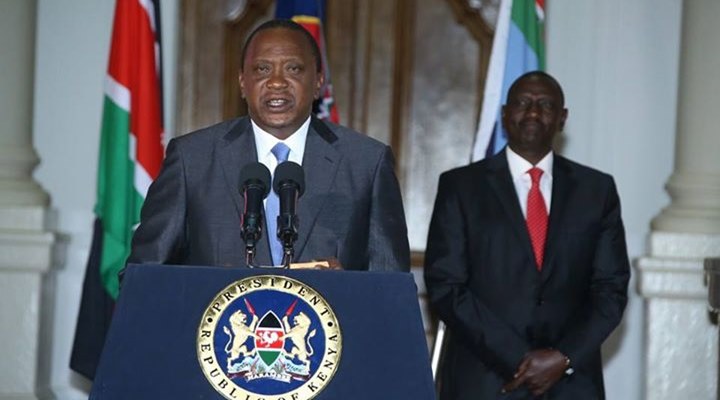 H.E President Uhuru Kenyatta through a state address on Sunday evening urged teachers to reconsider their position on the ongoing teachers strike. The President stated that the child’s interest should be put first looking at the public wage bill is way higher than the one paid out for the previous year. Below is his speech :

Let me begin by paying tribute to the of thousands of Kenyans who are engaged in public service right across the country. These patriots commit time and , expertise to the service of our country in the health, education, and security sectors, among others.

My government is committed to ensuring that Kenya’s public servants are well remunerated, well managed and well taken care of so that they can continue to deliver essential public services. To do that, we must manage the public service in an affordable manner.

Two days ago, my government took the unprecedented step of revising term dates for our schools. That was necessitated by the unprotected teachers’ strike, which has disrupted the education of our children.

For the last three weeks, millions of our children have stayed home. When they have gone to school, they have learned little because teachers have had a protracted dispute with the Teachers’ Service Commission.

The disruption is familiar, because it is only the latest in a long series of similar troubles. In the last seven years, there have been eight strikes or strike threats, timed to be as disruptive as possible in the school calendar. This latest strike comes under similar circumstances.

In the past, we lacked a framework to settle these disputes in a structured manner. Public servants who did the same work and had the same qualifications found themselves paid differently. In turn, some public servants developed a culture of indiscipline and confrontation. Kenyans want an end to disorder, and unequal pay.

In 2010, Kenyans chose a new constitution for themselves. We chose a new mode of governance in pursuit of fair and conclusive resolution of such disputes, as opposed to the strife and inequity of the past. The new constitution established the Salaries and Remuneration Commission for the first time in our history, and conferred on it the mandate of managing the remuneration of public officers, including teachers.

The mandate of the SRC is to set, review and advise on the remuneration of all state and public servants, including teachers and myself, with a view to ensuring that the public wage bill is fiscally sustainable. At the moment, our public wage bill accounts for 52% of revenue.

All public and state officers, myself included, number 680,000, just about 1.5% of the entire Kenyan population.

It is important to point out that of the KSh 1.1 trillion collected in revenue last year, KSh 568 billion went to pay our wages, meaning that 1.5% of us consumed 52% of our revenues.

Our debt, our maintenance of public assets, and our essential public services must be paid for out of the remaining 48%. If the award were paid to teachers, the SRC would be forced to harmonise wages across the entire public sector. Based on last year’s tax revenue, our wage bill would rise from 52% to 61% revenue collected.

Fellow Kenyans, the new constitution also set up the TSC as an independent constitutional body to recruit and manage Kenya’s teachers. In the management of teachers, and working with the SRC, the TSC has progressively enhanced the terms and conditions of teachers, and they have now been brought up to par with other civil servants. That is the equity that Kenyans expect under the new constitutional dispensation. Right now, a teacher in Kenya is paid the same as other civil servants with similar qualifications and responsibilities.

Indeed, a P1 certificate-holder enters the service at job group G, with other public servants of similar qualifications.

Moreover, a graduate teacher enters public service at job group K, the same as engineers and other specialised professionals. No one can reasonably complain that teachers have been left behind.

The claim that the TSC still owes our teachers money under the 1997 agreement is not true. Then, teachers were awarded a pay rise of between 150 and 200%. The award has been settled in full.

In any case, 55% (approx. 168,000) of all teachers employed by the TSC are in job groups J to N, earning between Ksh 35,000 and Ksh 75,000 a month. This is significantly higher than their counterparts in the private sector. Ironically, private schools often perform better than their public counterparts.

The claim that Kenyan teachers are paid less than their colleagues in the region is also not true. The lowest-paid teacher in Kenya earns seven times as much as his counterpart in Burundi.

The lowest paid teacher in Uganda earns the equivalent of KSh. 7,600; the lowest paid in Tanzania KSh. 15,800, compared to the lowest-paid Kenyan teacher who takes home over Ksh. 23,000. Indeed, Kenya’s teachers are the third-highest paid on the continent, after Morocco and South Africa both of whose economies are larger ours.

Ladies and gentlemen, many of you will remember that the current dispute began when the Industrial Court awarded teachers a 50-60% pay raise.

The TSC and the SRC took the view that their constitutional mandate had been usurped. They appealed, and they will be heard on Tuesday 22nd September 2015. There has been no final determination of this award.

Contrary to assertions in the public domain, the Supreme Court did not make any determination regarding the award: it decided only that it lacked jurisdiction to hear an application challenging the exercise of discretion by the Court of Appeal.

Another reason for the appeal was the advice of the Treasury that paying the award in the amount requested would seriously distort our public finances and hurt our economy. In this financial year, KSh174 billion was set aside to pay teachers, up from KSh 139 billion last year. If the award were paid, we would have to find an additional KSh 118 billion, to meet the salary and pension obligations of the award.

The fact of the matter is that to pay this award, we would have to raise VAT from 16% to 22%, OR borrow more money OR suspend critical development programs and essential services in health, in education and in security. Raising taxes, borrowing more money or cutting back on development programs will raise the cost of living, slow down our economy, and increase unemployment and poverty. None of these options is tenable. Our country must live within its means.

Previously, as Minister for Finance, I personally engaged the teachers’ unions in matters regarding the pay and welfare of teachers. That was then, under the old constitution. Now, under the new constitutional dispensation, the TSC, in consultation with the SRC, has engaged unions and other key stakeholders in a good faith attempt to settle this dispute amicably.

My government attaches great importance to education as a key driver of the transformation agenda.

As a result we have not just improved the terms and conditions of teachers’ service, my government has also invested heavily in the education of our children. To make that learning accessible and affordable to all, my government raised grants to primary and secondary schools by 49.4 per cent, from Ksh 31.2 billion to Ksh 46.6 billion. Our ultimate aim over a period over a period of 3 to 5 years is to make primary and secondary education truly free.

Further, we have removed the burden of exam fees from parents, making it possible for all our children to sit their Standard 8 and Form 4 exams without having to pay. In 2013, only 8,104 of our primary schools were connected to electricity. To create social equity, and to improve the quality of education, my government has in the last two years connected an additional 14,251 primary schools, meaning that 95% of our primary schools are now connected. Indeed, in the next two months, the remaining 5% will be connected.

We have continually committed new funds for the employment and promotion of additional teachers, and we have doubled the amount available for sanitary pads. Moreover, for tertiary education, 60 new technical training institutes are in various stages of completion, and a further 70 have been earmarked for construction, expanding opportunity for the training of our young people. These programs are proof, if any were needed, of my government’s commitment to the entire education sector.

Faced with the tension and animosity of striking teachers that occasioned threats to the safety and security of millions of unsupervised and unattended children, and the risk of destruction of educational facilities in public and private schools, my government has taken steps to protect our children, to reassure their parents, and to safeguard public property. Last week, we revised the dates of the third term. Boards of management were advised to carry forward fees already paid to the new term dates, which will be announced in due course.

Equally, we have made arrangements to keep the examination schedule on course. Candidates have been advised to remain in school as usual, as have all staff who will prepare them for the exams. All other children have been asked to return to the safety and care of their parents.

Ladies and gentlemen, Government is about service. I urge all teachers as parents, as public servants, and as Kenyans to reconsider their position on this matter, and to resume their duties, in the interests of our children.

Let me also encourage teachers and their unions to represent themselves honestly to those who pay their wages. Let us deal sincerely with each other, because only then will we find lasting solutions to the challenges that face us.

In closing, it is my hope that the facts as laid out in my statement bring clarity and understanding to this matter. Let us remember that it is our future, and that of our children, that is at stake. I urge sobriety and sincerity on the part of all parties, as we handle this issue.

And, frankly, it is wrong to hold our children hostage to wage demands. Even as we all seek a peaceful end to the dispute, we ask teachers to let our children return to school. I am also aware that at this moment, parents and children are anxious. But I want to reassure them that we have the institutions, the means, and the goodwill to end this dispute, and bring our children back to school. I urge the relevant constitutional bodies to discharge their duties expeditiously, and in the best interests of our children, and the nation of Kenya.

In consultation with relevant institutions and stakeholders, my government will do all it takes to bring a lasting solution to this perennial problem. We all have but one desire: to see our children back in school soon.

Thank you and God Bless you.”