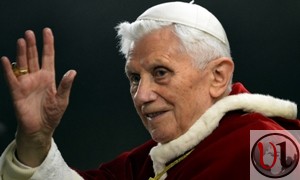 In his first statement to the press since stepping down from the papacy in February, 86-year-old former pope Benedict has said he left his office because God directed him to.

Benedict told an unnamed reporter he felt the conviction to step down in a “mystical experience” that “had lasted months” where “God told [him] to” retire to a private life of prayer. He also claimed that the “charisma” of current Pope Francis gave greater context to why God had led him to retire from the post.

Benedict’s comments, made several weeks ago, and which first appeared in the Catholic news agency Zenit, were his first since his abrupt resignation. The German ex-pontiff became the first head of the papacy to step down in about 600 years.

Benedict initially attributed his resignation to his waning stamina and physical well being.

“My strengths, due to an advanced age, are no longer suited to an adequate exercise of the Petrine ministry,” he told his cardinals in February.

His self-assessment was reiterated in the media. The Guardian reported a German journalist’s assertions in a recent meeting that the former pope “was going deaf, appeared to be blind in one eye, and was emaciated and ‘exhausted-looking.'”

Yet many continued to speculate that Benedict had stepped down because of shadow Vatican scandals; Benedict’s butler, Paolo Gabriele, leaked his personal correspondence. The Italian press also reported on an insider pro-gay lobby within the Church.

No more information on the latter has emerged as Pope Francis’ popularity has had the press gushing over his relative austerity, humility and modesty. For his part, the current pope has said that he has appreciated access to Benedict’s advice.