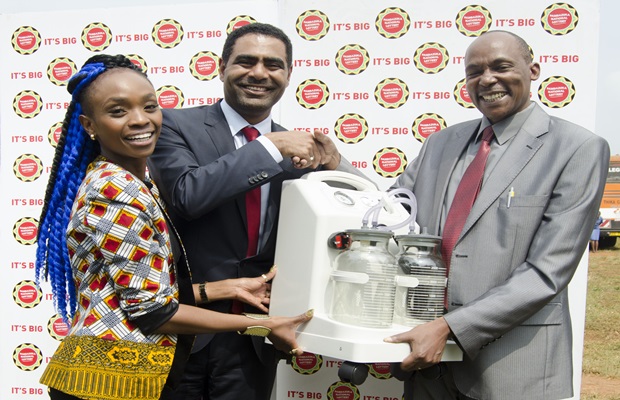 In a bid to advance the healthcare sector in the country, Pambazuka National Lottery delivered medical equipment worth over Kshs.7million to the Maragua Level 4 District Hospital in Murang’a County. The Good Deeds activities are being run to help in addressing the country’s need for accessible and affordable specialized health care.

Pambazuka National Lottery is committed to improving the country’s healthcare sector by using part of their proceeds from the lottery to support various health causes and initiatives.

The Good Deeds campaign has been making donations towards different worthy causes across the nation leading to the successful launch of the Pambazuka National Lottery (PNL) on 10th July, 2016. The beneficiary hospital was nominated after the PNL team in conjunction with Stella Mwangi (STL); PNL’s brand ambassador visited and assessed the needs of the hospital. The donation included wheelchairs, stretchers, incubators, baby cots, patient beds among others.

The Maragua level 4 district hospital was started in 1978 as a health center and training facility and was later turned into Level 4 District Hospital in 1997. The hospital currently has 70 Nurses, 8 medical officers, 8 consultants and 11 clinical officers with a bed capacity of 120. They cater for 500 patients a day and common cases include flu, hypertension, ovarian cancer, diabetes and pneumonia. On average the hospital records 350 deliveries in a month with 12 to 15 deliveries a day.

Speaking during the handing over of the medical equipment Pambazuka National Lottery CEO, Hussein Mohammed said, “As we all know the health sector in the nation needs a lot of investment to ensure that everyone gets access to proficient yet affordable medical services. It is therefore a great honor to be to making a difference in the lives of the people of Muranga County by giving these medical equipment.”

“Pambazuka National Lottery is committed to ensure that we impact the lives of all Kenyans and we will endeavor to have beneficiaries through a percentage of our proceeds.” He added.

The PNL Good Deeds campaign brand ambassador Stella Mwangi is a Kenyan-Norwegian singer, songwriter and rapper based in Norway and arguably one of the best female artists in Kenya. She has made a name for herself at home and abroad with hits in Kenya, Gambia, Senegal, Germany and Norway. Prior to the launch of the Pambazuka National Lottery, STL was involved in the Its Big campaign which saw her visit the adult cancer wards at Kenyatta National Hospital and sang for the patients, donated wigs and gave a make-over to the ladies at the ward. She is currently the Pambazuka National Lottery brand ambassador.

Giving his acceptance speech, Dr. Kimani Ngige, Medical Superintendent, Maragua Level 4 District hospital said he was overjoyed with the great gesture that PNL had shown. “We thank God for Pambazuka for we are the first ones to receive such a huge donation from them. We were in dire need of incubators as the two in the new born unit were faulty. Therefore, these medical equipment could not have come at a better time as Pambazuka has given two new incubators.”

“We began as a humble rural training hospital and have grown to be one of the leading hospitals in the county. And with this equipment upgrade we endeavor to offer better services to the residents of Muranga County.” Dr. Ngige added.

The biggest Good Deed was done prior to the national launch with PNL delivering maternal and new born care packs to 47 hospitals across the country. Other beneficiaries of the Good Deeds campaign were the Mary Faith Rescue Centre in Dagoretti, Provisional General Hospital in Nakuru, Mariakani Hospital in Rongai as well as Makau Muli, a student suffering from fibromyalgia, who was given funds to assist him seek medical attention.

The Pambazuka National Lottery (PNL) was launched as a Kenyan lottery established in 2016 aimed at introducing world-class best practices into the Kenyan market.