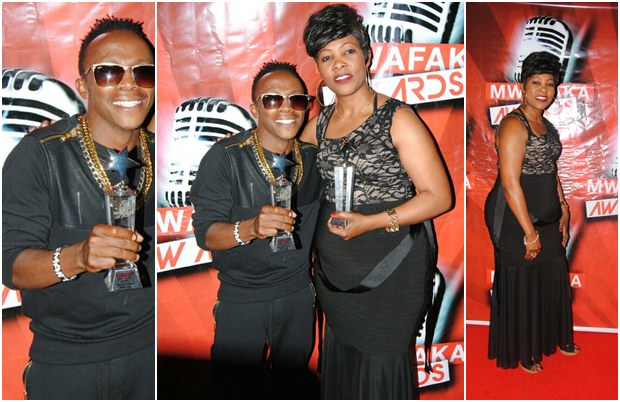 The 2014 Xtreme Awards Artiste of the year, Janet Otieno scooped this year’s best female gospel artist of the year at the 5th Mwafaka Award that went down over the weekend at KICC. The gospel singer who is just two years old in the industry came to the limelight when she released the hit song ‘Napokea Kwako’ a collaboration with Tanzania’s gospel artist, Christina Shusho that really propelled her career in gospel music and saw her win her first award at Mwafaka 2013 for collabo of the year. Janet Otieno has also been nominated for the prestigious international award,the Sauti Awards in Atlanta,USA recently held in August this year.

Bagging the award for the best male artist of the year was Papa Dennis, the’ Injili’ hit-maker singer. Papa Dennis was nominated along other seasoned gospel male artists such as Bahati and Willy Paul.

Papa Dennis who has already made a name for himself, has collaborated with big gospel artists such as Daddy Owen for their hit song ‘Foundation’.

The Duo, Papa Dennis and Janet Otieno who posed for a picture together were elated thanking God and their fans for the support they had received.

Through her Facebook status, Janet celebrated her win and prayed for all who have supported her to be blessed.