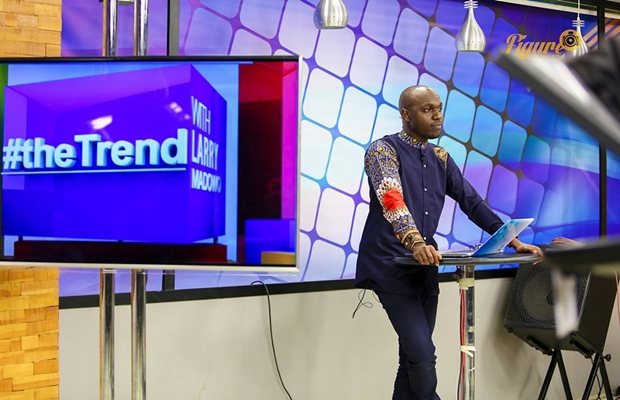 The ambiance that surrounded 10pm on Kenyan TV changed after Larry Madowo was invited into our sitting rooms with his interactive, informative show- The Trend. The show covered the viewers who would rather sit in on Friday nights, switching through the local TV channels.

The Trend with Larry Madowo is described as a “variety entertainment and viral video show that broadcasts live twice on Fridays. The ‘first service’ of the show airs at 9pm and the ‘second service’ is live from 10pm. Viewers of the show find a place where they can meet the internet’s most talked about topics for fun, an unpredictable look at arts, music, technology and cats.”

Recently, a competing TV station borrowed a leaf, and began a show at 10pm on Fridays. A few weeks into the show and the differences between the two shows are as clear as day. Now, here is why The Trend should remain as ‘thee’ show to watch on Friday. It is a show that is decent. You can sit down, from the long week, with your parents and tune in to NTV, and comfortably involve yourself in Larry’s topics of the day as well as laugh at his ‘jokes’ with your folks. I don’t know if your family sits to wait on The Top 5 videos of the show. Besides that, it can be noted that Larry is keen on making sure all context of the show,is within the boundaries of moral standards.

The other show airs at the same time on a different TV station. I watched the show for the first time and couldn’t sit through it. Yes, it may have good content, in terms of entertainment news and all, but every time the music came on, I flinched in my sit fearing for the worst. It bothers me that the show has an audience that is possibly between 18 and 25, who are excited about the idea of being on TV showing their ‘not so decent’ dance moves to the viewers. I understand that it may be what part of the society wishes to see. I mean, Friday nights are for clubbing and dancing the night away right? (Wrong!)

I am not blind to the truth that such behavior is what is being tolerated, with moral standards declining and all. But it is by no means acceptable for it to be encouraged. While the media may be free to decide what their definition of ‘moral’ is, the fact remains that they should be at the forefront of discouraging certain content. We are in a generation that copy pastes nearly everything seen on the TV and Instagram posts. I’m pretty sure we’d raise a better generation if all they had to copy paste from our TVs and blogs is positive moral content, that builds character instead of encouraging the opposite.