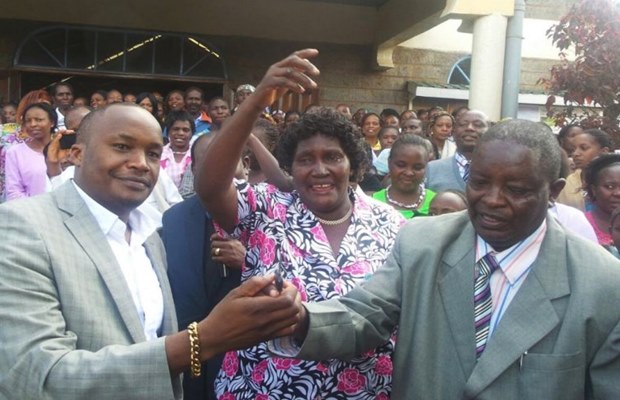 Jaguar , Charles Kanyi, and his teacher who was gifted with a Toyota

Musician Jaguar on Sunday presented his former teacher with a Toyota Rav 4 as a sign of gratitude for helping him finish school.

Jaguar (full name Charles Njagua Kanyi) who serves in the NACADA board of directors presented Evanson Gathigu with the car at PCEA Githirime church in Thogoto, Kiambu county.

Jaguar recounted how Gathigu brought him back to school after he dropped out following his mother’s death.

The musician took the opportunity to advice youth in the county to take their education seriously to avoid crime and drug abuse.

“I would like to call upon youths with close monitoring of parents to study hard and do any work that’s available. Through this we will keep our youths busy and prevent them from engaging in criminal activities and joining groups like the dreaded al Shabaab group,” Jaguar said.

Jaguar at the same time sought to clarify why he opted not to resign from his position in the NACADA board as he had previously announced.

The musician who had cited corruption at the organisation as the cause of his intention to step down, changed his mind after President Uhuru Kenyatta ordered a crackdown on illicit brews.

“After I issued my notice to resign from the organisation after realising that people were not serious there, the President issued an order for the crackdown on illicit liquor. I changed my mind and committed to changing the organisation from within,” said Jaguar.