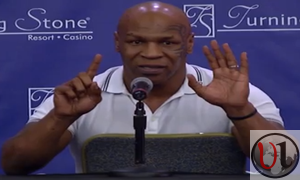 Former undisputed heavyweight champion boxer of the world Mike Tyson  confessed that he was struggling with a lot of things and wanted to be forgiven.

In an Interview Tyson confessed that he had been sober and drug-free for just six days . In his own words:

“I’m on the verge of dying because I’m a vicious alcoholic. I’ve been trying to remain composed.I haven’t drank or took drugs in six days and for me that’s a miracle. I’ve been lying to everybody else who thinks that I’m sober but I’m not. This is my sixth day. I’m never gonna use again,”

He even went on further to ask for forgiveness from all the people he had wronged before including his own personal trainer Teddy. He Said :

“I’m a bad guy sometimes. I did a lot of bad things and I wanted to be forgiven…I want to change my life now. I want to live a different life. I want to live my sober life. I don’t want to die.”

“I was wrong and I’m sorry. I was wrong and I just want to make my amends. If Teddy accepts it or not at least I could die and go to my grave and say I made my amends with everybody that I had hurt. It’s all about love and forgiveness.

Watch his interview in the video below.