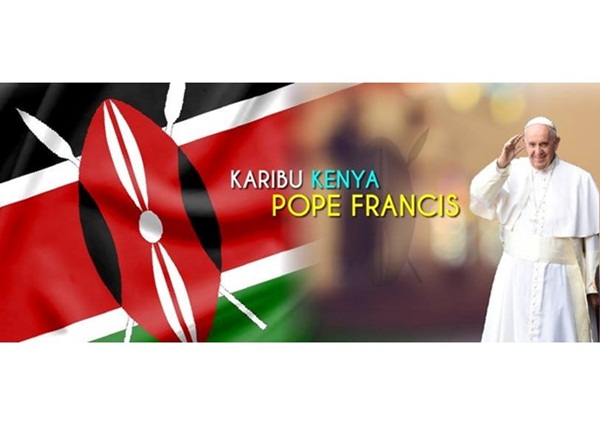 It is now official that November 26,2015 will be a public holiday and a national day of prayer and reflection after President Uhuru Kenyatta made this official through a statement issued from State House. “As we are privileged to be hosting His Holiness the Pope at the time, he will set the tone for the day,” a statement from State House spokesperson Manoah Esipisu said.

Pope Francis is expected to arrive  in the country on Wednesday 5 p.m in his first tour in Africa that will see him visit also Uganda and the Central African Republic.

On his second day of his visit which will be  Thursday,the Pope will start his official tour where he is hold an inter-religious meeting in the morning then proceed to celebrate a public mass at the University of Nairobi grounds.

Later in  the day he will hold another meeting  with Catholic Church clergy and seminarians at the St Mary’s School grounds  and then visit the United Nations Environmental Programme headquarters in Gigiri.

The CBD will be under a lock down with everyone who will be attending the mass people at the University of Nairobi’s Graduation Square  expected to have the special cards and badges that have been issued by the Steering Committee. This applies even to the priests and religious leaders.

Some of the major roads that will out of bounds for motorists heading towards the CBD according to police are Lenana Road and Dennis Pritt Road while motorists using Arboretum Road will not be allowed past Kileleshwa Petrol station.

Motorists using Waiyaki way heading towards the CBD will be blocked after Villa Rosa Kempinsky hotel and will not access the overpass or underpass at Ojijo which will also be blocked.

Thika Superhighway will be blocked at Forest Road while those intending to use Murang’a Road will not be allowed to go beyond  University Way near Lillian Towers.

Uhuru Highway is also expected to be blocked along Kenyatta Avenue near GPO, while those coming from Upper Hill will not be able to access Haile Selassie Avenue.

Vehicles coming from Mombasa Road will also not be allowed into the CBD as motorists will be forced to leave the vehicles at Nyayo Stadium where parking space will be provided.

On the same evening, Limuru Road is expected to be affected as the Pope will be heading to UNEP