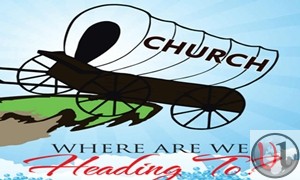 Thuso Kewana, an ordained pastor and ministry leader living in impoverished South Africa, says he can be silent no longer about the damaging effects of the prosperity gospel, an American export he believes is unbiblical and used by wolves in sheep’s clothing to prey on mostly charismatic and Pentecostal Christians not only in his country, but around the world. Kewana, speaking recently via phone from his home in Polokwane in the Limpopo province, bordered by Botswana, Zimbabwe and Mozambique, said he has witnessed how the prosperity gospel can warp people’s understanding of God — leaving the impression that He requires worshipers to give money, to ministers, churches or their favorite television network, before they can be blessed with financial, physical and spiritual well-being.

“People are leaving churches. Some practice fellowship in their homes, but some leave the church and go back to their old lifestyles. Some leave to stay at home and do nothing,” Thuso writes in Where Are We Heading To? The book critiques the “obsession” of some pastors for material things and large congregations.

“This is because of the disappointments people experience with churches and church leadership. This is more prevalent with so-called spirit-filled or charismatic churches,” Kewana adds in his book.

“The greed for worldly wealth, huge church membership numbers, and fame form the cornerstone of such dissatisfaction engulfing the congregants and encouraging them to leave the church of God. Pastors are involved in all sorts of ungodly behaviors.” The prosperity gospel appears to most find its home in the “word of faith,” or name-it-and-claim-it movement, which positions some charismatic preachers as special carriers of God’s favor and power. These particular ministers are then often looked to by hopeful Christians as their key or source to divine healing and blessings.

“The problem we have in this country is the type of Christianity people are practicing whereby, instead of seeking to know God through his work and a relationship with the holy spirit which is assured to every Christian, are running after signs of miracles,” Apostle Samuel Yaw Antwi, General Secretary of the Ghana Charismatic and Pentecostal Council, told the Guardian.

“People want instant solutions to their problems, just like they want instant coffee. If anybody comes along offering instant answers to financial or health challenges, people want to go for it. But the Bible warns Christians about that.”

It is this same mindset, along with Biblical ignorance, that Kewana believes allows the prosperity movement to thrive in his own country of South Africa.

“You know right now, everybody listens to the TV and watches TV and (to) look at what is happening with the churches, to be honest with you know I don’t know if I’m feeling more despondent on a daily basis,” Kewana said of his observations. “And I wish, like one guy said to me, people should know that the route to God is not a short cut and the root to God is not a nice paved way with flowers and blah blah blah. It’s a narrow road that’s full of tribulations, and we’ve got to face them.”