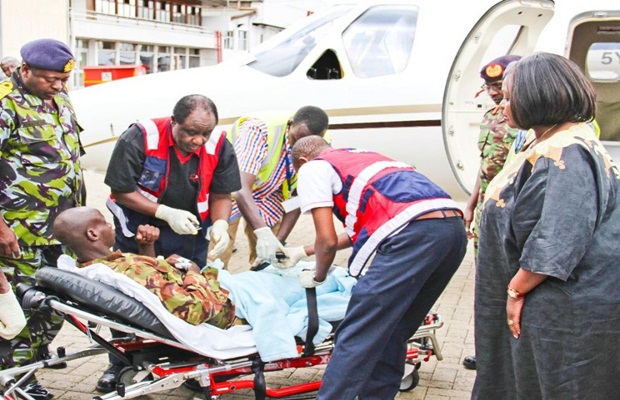 The horrific Al-shabab attack that occurred days ago, caught many Kenyans by surprise and the same for KDF soldiers who were ambushed while sleeping. Over 60 Soldiers were reported dead after that and one Kirui was so near to be added to that list but a moment of prayer and Faith really helped him survive the ordeal.

Things were really bad like I have never seen such kind of situation in my life, said Kirui from Olchobosei in Transmara. Kirui was among the survivors who returned back to country to get better medical treatment and his story will surely bring tears to your eyes.

“At first I thought I was dreaming, only to wake up to reality of everywhere burning. I couldn’t put on my trousers which I was using as my pillow since cross fires were over my head and I couldn’t standup even. I crawled out of the barracks through a bombarded wall and my fellow soldiers were being dropped by bullets of al-Shabaab everywhere every minute, and I got lucky I could say when one of my fellow soldiers was unfortunately was shot and his body fell on me, I couldn’t move him but act as if I was death too and lie beneath his lifeless body with his blood spilling all over me and when one of the insurgents came revising life out of those who were still alive, he couldn’t correct a bullet on me which I guess it’s because I was full of blood spilled on. I latter heard them firing their guns up and celebrating. After some time, I have been acting death by closing my eyes all the time since the incident occurred, one of them came and held my leg, and I knew they had realized me!! I thought to kick him and run away but I realized the consequences of their majority would lead to my death by me being shot and so I decided to take my chances. He was doing something to my left leg. “What is he doing and I don’t have a shoe?” I asked myself, Kirui said. I was sleeping when the ambush happened and I was only wearing my under wear that’s why my shoe wasn’t on me coz I usually sleep my boots and my trousers wearied off.

After deciding to take chances, I was about to give in when I realized he was tying something on my leg. It was a rope which they used by tying it on to the cars so they could pull the dead bodies of KDF soldiers to El-ade town to parade for the world to see.

I had to persevere all the pain of being pulled and dragged down on sandy Somali land and almost the high speed they were using. I died for a moment and I never realized when they got our bodies to El-ade. I woke up latter with hallucinations and straight with my belly hedging for pain I sat down. #you_wouldnt_imagine_how_jehovah_God_of_israel_was_great_to_me !! It was almost noon and all I could see was their behind up and heads down. #they_were_praying. I realized they wouldn’t notice me if I sneaked into the nearby bushes, I took the chance immediately and limped to the nearby bush. When I was there lying down flat on the ground, it came to my mind that I had this small bible published by kings James fashion and which I usually carry and sleep around with it. I pulled it out of my uniform pockets shirt the only better cloth I had. I just opened it and it was the book of Ruth a verse I couldn’t remember and it was reading #whenever_you_go_I_will_be_with_you. Immediately before I could open another page, I noticed through a foliage of the bushes that two people with AK47rifles were approaching, I now had nothing to hope for but to forward myself to God.

I prayed looking up the sky and my eyes wide open and said, Jehovah God of Israel, you saved your children of Israel from Egyptian oppressions and so don’t you let me to the hands of these enemies of humanity. Immediately a snake came crawling and something told me don’t move, it came crawling upon my stomach since I had lied down facing up.it did not bother itself to venom me but went straight to a big hole which I hadn’t noticed, my concentration now went back to those two al-Shabaab insurgents approaching, they were closing in and for sure they were coming to my direction, I had to hide. Would you imagine there was no option other than big hole that seemed like some animals searching a meal of hunt hills dug it up and that snake as occupied it first?

It was now #kufa_kijeshi_time,I had to take this guy’s according to my training or fit in that hole with that snake. It dawned on me that I had no weapon since this guys got us off guard and still sleeping without clothes nor even a spoon leave alone a knife. I prefer to be bitten by the snake and survive to be found by KDF rescue team. I choose to fit in to the hole.

I did and it turned out the other way than I had expected it to be at first it, the snake was for sure a God sent to show me where to enter and hide, because when I crawled in to the hole, it seemed I troubled the stay of the snake in that hole and it crawled out its walls faster and exited immediately, it gave me an awful look and ready to attack at the exit. I didn’t close my eyes too and we kept the look on each other. The look challenge did not last when the insurgents interrupted, the snake moved away and now inside a dark hole I was waiting for anything. I could hear their footsteps and all of a sudden there were no movements. After a moment my nose could smell funny smell and I realized they had come for a long call inside the bushes. It wasn’t for long and I could hear them walk away, at least now I was feeling safe. After a moment with all the pain in my body I was swept away by dizziness and carried by sweet sleep, I woke up to the thundering sounds of flying helicopters and bombs being dropped and I knew KDF rescue team were on site in El-ade, I went out of the hole and got out of bush and El-ade was in fire. Immediately I had somebody say with a big voice behind me.#dont_move #wewe_ni_nani?

That’s is when I was reunited with my fellow KDF soldiers.”