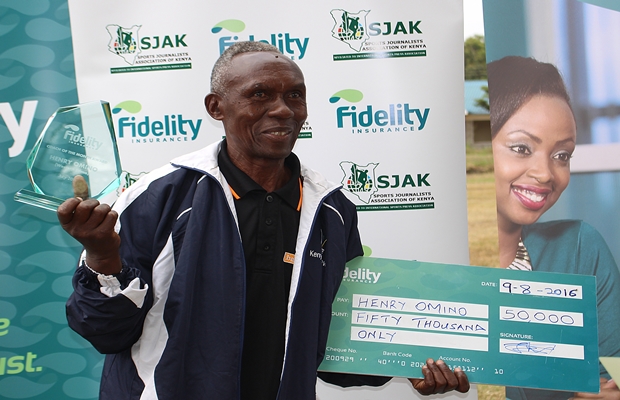 Overly confident Western Stima tactician Henry Omino has been befittingly voted the Fidelity Insurance Coach of the month for July. The veteran coach geared his side for a bullish run that resulted in Kenya Power’s flagship sports outfit storming into top five of the Premier League.

Drawn alongside other remarkably performing coaches over that period, Omino polled seventeen points to become the fifth recipient of the gong. Francis Kimanzi, Ivan Minnaert, Zedekiah Otieno and Salim Babu won the preceding four awards following its inception in February. Western stima stayed unbeaten in July and collected eight points from their four league matches same as Homeboyz. Omino’s side, despite losing their erstwhile target man Baron Oketch in the June transfer window, beat bottom placed Sofapaka and off-color Mathare United then drew stubborn Posta Rangers and a reinvigorated Thika United to round their points tally to eight.

The veteran is now focused on homing in on the title as top placed sides dither with nine matches left to the close of season. “Our target was to finish in the top five and we are happy to be right about there although the season is not due. A lot can still change but we want to stay positive and mount a title challenge.” Said the elated coach

“The difference between us and top teams is not that big and if they continue dropping points we can catch up and steal the title. Nobody is thinking of us as title favourites but any team can win it this year. After the midseason we have emerged strongly and look to keep the tempo in the remaining matches so that we finish at the highest position that we can.” He added

The tactician whose stay in the top tier can only be rivaled by Ulinzi Stars’ Robert Matano believes he can build an unbeatable side if he had resources similar to some of his contemporaries. “Our recruitment policy and budget restricts us to young and upcoming players who we cannot hold onto after they are developed but if the playing field was fair, Stima could have an unbeatable side.” He concluded.