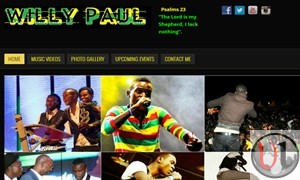 After winning the Groove Awards Male Artist of the year and Mwafaka Awards Song of the year consecutively Willy Paul has decided to up his game by going digital. Willy Paul who recently released  a well received song Lala Salama has decided to join the digital world by launching his our website Willy Paul World. In the website you will find his music videos , News and upcoming events.

He now joins the list of gospel artists who have websites including Juliani, Alice Kamande and Masha Mapenzi.